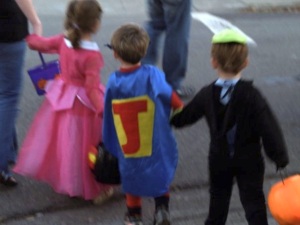 Remember Halloween when you were a kid? How good was Halloween. Throwing together some funky diy costume, grabbing a pillowcase for your candy haul, running around with the neighborhood crew until well after dark… adult-free. Then coming home, dumping out your candy piles, trading with your brother while your mom checked for rumored razors. Good times. I loved it. LOVED it.

I was feeling nostalgic about it today while at our school’s Halloween Carnival. I mean, while we live mere miles from a major metropolis, Halloween is still much the same all these years later. Old-school style carnivals, pumpkin patches, trick or treating, candy… it’s still going strong.

Halloween is also obviously a really perfect holiday for making stuff. This week I’ll try to post some of our favorites, starting with stuff we’ve made in the past.

Mummy Cake
Ok, this isn’t from the past, this is from today. My daughter and I made it for the carnival cake walk. We totally cut corners because she’s four and I work full time. So I got a box of Red Velvet (mwahaha, blood) Cake mix, a jar of vanilla frosting, and was all set to bust out some mummy wraps with a piping bag when I stumbled upon a mummy cupcake kit at Target. White sour gummy strips! Like striking gold.

All we did was cut a top of a cardboard box and wrap it in foil for the tray. We then baked the cake in a 7″ Corningware dish so that it would be tall. Then frosted it with the white frosting, leaving the eye area bare. My daughter plopped some sugar eyes on, and we wrapped it like a mummy with those gummy strips. So easy.

Mummy Dogs
These are so easy and kinda rad so I make them every year. Use full hotdogs, or cut them in half, or get lil smokies, they all work. I’ve wrapped them in strips of Trader Joe’s pizza dough and I’ve tried breadstick or other pre-made doughs. I like the look of the pizza dough best but I recommend brushing them with some melted butter before baking. So pick your dough, cut it in strips, wrap the dogs, bake at 375-ish until the dough looks done. Dot mustard or ketchup for eyes.

Alien Cupcakes
These were from the Hello Cupcakes book. They were hard. Don’t start them at 10PM.
http://blog.hellocupcakebook.com/2009/10/21/more-halloween-cupcakes.aspx

Dalmation (Cow?) Costume
White onsie, black fabric paint… all planned around a cute hat she already had. She was a cute little Cowmation.

One thought on “Halloween: Pt 1”