Look at these poor, sad peas. Wilted, neglected, bummed out. Today’s make was clear, get these guys in the ground!

I gathered up some bamboo poles we’ve had leaning against our house for the better part of a decade, some twine, a pot, and our trusty bag of Black Gold soil.


Ill timed for after a day in the pool, Jack tried to get out of his garden duty again. Uh uh, no way mister. You wanted to start this garden. So he begrudgingly dragged himself to the pot and started filling.

When the poles came out, things perked up for Jack. After whipping them around Kung Fu style, sound FXs at full volume (and spit) level, he landed them in the pot. But he wasn’t in it for long, once the twine came out, he was out.

I tied the tops of the poles together and then wound more twine around the poles for the peas to climb. I was sort of winging it (surprise!) but I know I’ve seen this set up before so it’s probably ok.

I then planted the starter peas near the base of the poles. I was later informed that I might have planted a few too many starters in this small pot, but whatever, survival of the fittest right?

Then came the water and seriously, within 10 minutes I swear I could see much happier pea shoots. Is it possible for them to snap to it to quickly? 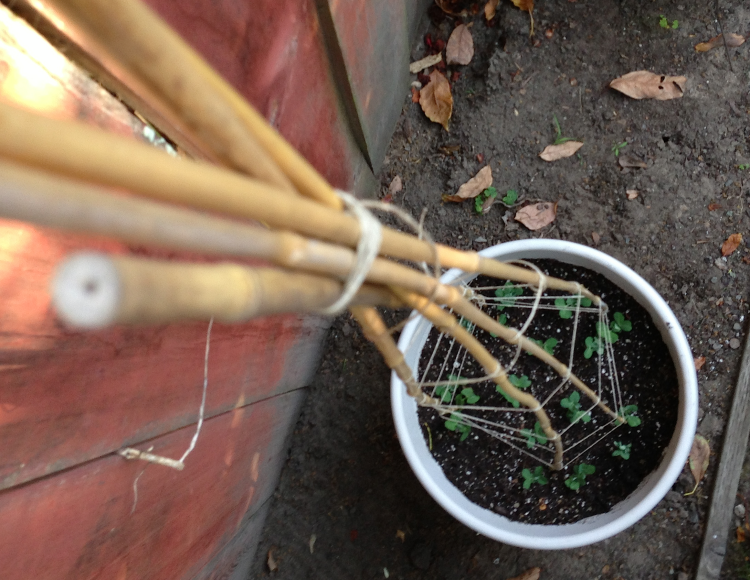 If you’re keeping track, we now have the following underway in Our Garden:
– Green Beans
– Carrots
– Broccoli
– Peas

And our existing crops:
– Plums
– Lemons
– Mandarins (though yet to be edible)

Next up:
– Tomatoes
– Strawberries