I make things for two reasons: 1) I love doing it 2) I want my kids to grow up knowing the importance of creativity, hands-on problem solving, and the joy of making stuff.

Tonight I realized my six year old gets it. Not just likes to do arts and crafts gets-it, but actually finds joy in making things up from scratch in his head. What a cool moment to watch him, all on his own, create layers of stuff all from his own mind, enjoy doing it, AND be doing it to gift to someone else. 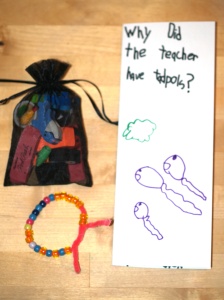 JACK’S MAKE STUFF UP:
Tomorrow is the last day of Teacher Appreciation Week so I asked Jack what he’d like to do for his teacher to say thanks. He thought about it for a sec, walked out of the room, and returned with a handful of various erasers. Earlier that day, his teacher had mentioned to him that she was out of erasers so Jack pinpointed this as the perfect gift for her. We continued scavenging around the house pulling together pink pearls, dinosaurs, random Japanese food erasers, etc into one bag to give to her. She might look at this bag of erasers and think huh? But I trust she’ll understand the completely thoughtful gesture.

Jack is a bit of a jokester, loves a good prank and has lately started making up his own material. The jokes started off really obvious, as you’d expect for a six year old. But tonight, he worked it out. He started it off, tried a few punchlines, kept iterating, and BAM you could see it on his face… he HAD it. And it made me frickin laugh. It was super contextual and it worked. The backstory: His teacher has tadpoles in the class, she feeds these tadpoles lettuce all the time. This is his Teacher Appreciation Day card for her…

It’s funny right? Too much lettuce? Gets tadpoles to take care of the problem? ok. I am his mom but I won’t laugh at every joke. I loved this one.

Also, I am a little creatively tapped today and needed someone else to take the reigns on the Make Stuff Up Challenge so thanks Jack!